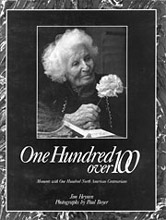 The idea for this book came out of thin air–one of those flashes while I was jogging at Fort Worden State Park in Port Townsend, Washington, in early 1987.

The most frequent question that I’ve been asked is, How did you find the centenarians? Believe me, it’s easy: there’s probably one living within five minutes driving distance of wherever you are right now. But here’s how I did it: I went to the local newspaper, The Port Townsend Leader, sat down with the publisher’s reference book that lists all newspapers in the US, addressed about a hundred envelopes to newspapers around the country, wrote a press release, included a sheet of information on myself so editors could check me out (make sure I wasn’t somebody trying to get close to old people to steal their money or something), stuffed the envelopes, and sent them off. The whole “promo” operation took me a day and less than a hundred dollars. Within weeks I had hundreds of nominations from all over the country. I used the same procedure in writing to state Offices on Aging, and I got similar results. I had well over a thousand nominees! I tried taking the accompanying photographs myself for a while, then wisely turned to my friend Paul Boyer, whose wonderful black and white photographs made a marvelous contribution to the book.

Unfortunately, the book is today out of print.

Best known for his short-short stories about “the boys,” Jim Heynen has published widely as a writer of poems, novels, nonfiction, and short fiction.